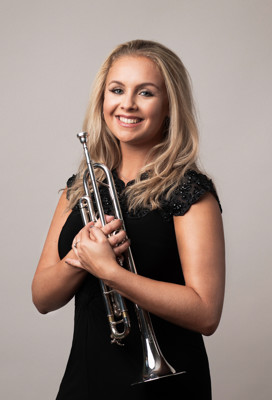 We are delighted to have the opportunity to present Yamaha artist and BBC Young Musician of the Year brass finalist, Matilda Lloyd, for a live Q&A session this month.

Hailed as “remarkable” by the Daily Telegraph, British trumpeter Matilda Lloyd is a fast-rising young artist with exceptional poise and musicality. Aged 24, Matilda is captivating audiences with her artistry and communication, her flawless technique and the unique character she brings to each and every work.

Taking place on Wednesday April 22nd at 7pm, Matilda will be answering questions about her life as a young female trumpeter, along with practical tips on playing the trumpet. The session will also start with a live performance from Matilda!

The session is free, however spaces are limited. To take part you need to register via zoom. There are 100 places available, but the session will also be available on our John Packer Ltd Facebook page via facebook live.

While currently isolating with her family, Matilda made this video with her mum accompanying:

In 2014, Matilda was the winner of the BBC Young Musician of the Year Brass Final, and in 2016, gave her BBC Proms solo debut, performing at London’s Royal Albert Hall with the BBC Philharmonic and Alpesh Chauhan. The following year, Matilda won the Eric Aubier International Trumpet Competition in Rouen, France, an achievement which led to her international debut in Spring 2019 with l’Orchestre de l’Opéra de Rouen.

Recent highlights also include performances with the BBC Concert Orchestra (for BBC Radio 2’s Friday Night is Music Night) and the London Mozart Players. In March 2018, she was chosen to replace Tine Thing Helseth for a celebration of International Women’s Day with the Manchester Camerata under Jessica Cottis.

During her studies, Matilda has been the recipient of many awards including a Hattori Foundation Senior Award and a Worshipful Company of Musicians’ Postgraduate Award. As a Park Lane Group Young Artist, she has performed at prestigious London venues such as St John’s Smith Square, St Martin-in-the-Fields, St James’ Piccadilly and Wigmore Hall.

Alongside her success as a soloist, Matilda has gained much recognition as an orchestral player. She was Principal Trumpet of the European Union Youth Orchestra in 2016 and 2017, touring Europe under Bernard Haitink, Gianandrea Noseda and Vasily Petrenko. Prior to this, Matilda held the position of Principal Trumpet of the National Youth Orchestra of Great Britain for two years, working with Edward Gardner and receiving critical acclaim for her First Trumpet part in Mahler’s Fifth Symphony at London’s Barbican.

A keen chamber musician, Matilda has led the EUYO Brass Quintet at prestigious engagements such as the opening of the EU Residency Building in Amsterdam and at the Austrian Embassy in London, and the EUYO Brass Dectet in various venues across Europe. She is also the founder of the Solus Trumpet Ensemble.

Matilda graduated with a First Class degree in Music from Cambridge University in 2017 and received a Master’s Degree from the Royal Academy of Music in 2019. During her studies at the Academy with Mark David, Matilda participated in masterclasses with Håkan Hardenberger as a Britten Pears Young Artist, sponsored by the Royal Warrant Holders Association Alan Britten Bursary, and with Eric Aubier, Jeroen Berwaerts and Wim van Hasselt.