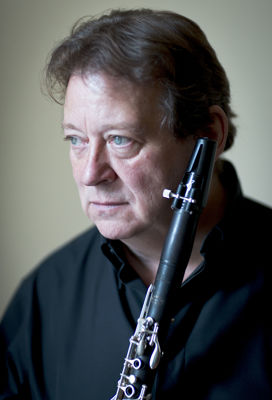 "A sublime musician with a liquid technique. An orchestral player without equal." CLASSIC FM

Join our fourth webinar with the professional clarinettist and Buffet artist Andrew Marriner on Wednesday July 1st at 8pm.

*** Register in advance to secure your place and send in your question, or watch the live stream on the John Packer Facebook page! ***

Andrew Marriner is a phenomenal musician with a huge amount of experience as a solo artist, orchestral musician and a teacher. This webinar is a unique opportunity for enthusiastic clarinettists of all ages and abilities to ask him for help, and learn more about his incredible life, playing in concert halls around the world and recording famous soundtracks like Harry Potter and Star Wars!

Andrew Marriner held the position of principal clarinet in the London Symphony Orchestra from 1986, until 2016, and was also principal clarinet of the Academy of St Martin in the Fields, a position he held concurrently with his commitment to the LSO until 2008.

He has been a regular soloist in London, at the Barbican and the Royal Festival Hall and at prestigious venues around the world, performing with some of the most distinguished figures in the world of chamber music, among them Alfred Brendel, André Previn, Andras Schiff, Lynn Harrell, Stephen Isserlis, Emanuel Ax, Hélène Grimaud, Sylvia McNair and Edita Gruberova, as well as the late Vlado Perlemuter and George Malcolm.

Much in demand as a teacher and woodwind consultant, Andrew gives masterclasses, coaches orchestras, and adjudicates competitions all around the world. Along with his career as a solo and orchestral artist, he is Professor at the Guildhall School of Music and Drama, and the Royal Academy of Music.

Highlights of Andrew's career include performances over the years with his father, the late esteemed conductor Sir Neville Marriner, both as soloist and as a member of the Academy of St Martin in the Fields, in which Sir Neville founded. Andrew has also given the world premières of several works written for him by Sir John Tavener, Robin Holloway, Dominic Muldowney and Douglas Weiland.

The BBC regularly broadcasts Andrew's concerto appearances. And as a member of the LSO, Andrew's playing can also be heard on dozens of feature film and television soundtracks, including those for three Oscar-winning Best Pictures - Amadeus, Braveheart and The King's Speech - as well as John Williams's scores for the Star Wars and Harry Potter films.

Andrew Marriner is a Buffet Crampon Artist and a D'Addario Woodwinds Artist.

How to get here